Next head of state unlikely to upset the status quo. 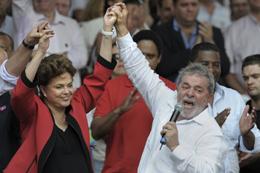 Dilma Rousseff (left) might be even better for Brazilian science than President Lula (right).M. LIMA/AFP/GETTY
Like many other Brazilians, the nation's scientists are hoping that the presidential elections of 3 October will bring as little change as possible. After nearly a decade of solid support for science from President Luiz Inácio Lula da Silva, his likely successor, Dilma Rousseff, has much to live up to.
Lula's own formal education may have been meagre, but during his seven years as president he has raised the status of science in Brazil by steadily increasing research funding (see chart) as a percentage of gross domestic product (GDP) [WINDOWS-1252?]— which itself has grown impressively (see Nature 465, [WINDOWS-1252?]674–675; 2010). He has also elevated Brazil's scientific profile by writing numerous editorials on its science-development initiatives, including one in Scientific American in 2008, and his science minister of five years, Sérgio Rezende, has published research about spin-wave theory in Physical Review Letters while in office.
"The Lula government brought a very important increase in funding and did very important work in terms of policy-making and agenda setting," says Paulo Gadelha, president of the Fundação Oswaldo Cruz (Fiocruz) biomedical research institute in Rio de Janeiro. "It was the first time that we brought together the traditional areas related to industrial policy with those related to science funding, health and agriculture."
It has not all been good news, however. Lula's former environment minister, Marina [WINDOWS-1252?]Silva — who is now is standing against Rousseff [WINDOWS-1252?]— resigned in 2008 because she did not think the government was doing enough to protect the Amazon. Despite her concerns, 2009 figures showed that deforestation plunged to a record low of 7,464 square kilometres. Another steep drop is expected when the 2010 numbers are released later this year.
BRAZILIAN MINISTRY OF SCIENCE AND TECHNOLOGY
Rousseff, the centre-left Workers' Party candidate, holds a strong position as Lula's anointed nominee in the election. Since late August, almost 50% of Brazilians polled have said they intend to vote for her as president. Candidates need half of the popular vote plus one ballot paper to win outright, and her nearest rival, José Serra, of the opposition centre-right Brazilian Social Democracy Party, is wobbling at around 28%. Silva is in third place.
Rousseff is expected to pursue Lula's policies across the board. Yet it would not necessarily be bad news for science if Serra were to win. Appreciation of the long-term economic benefits of innovation is spread fairly evenly across party lines, says Eduardo Viotti of Columbia University in New York, who advises the Brazilian senate on science policy. Serra was a popular health minister during the presidency of Lula's predecessor, Fernando Henrique Cardoso, when many of the laws that underpin Lula's increased science spending were passed.
If Rousseff does coast to victory, she might do even more for Brazilian science than Lula. Much is made of how she lacks his charisma, yet with a long career behind her as a diligent and efficient administrator, "she will probably be able to go further in terms of some of the discussions that are going on at the moment, for instance in integration between science and technology policy and health policy", Viotti points out. That kind of careful integration, of course, rests on the shoulders of the science minister, who is likely to be one of the last to be named in the new cabinet.
Rousseff's choice of finance minister will also be key. Luciano Coutinho, tipped as the front-runner for the post, is currently head of the Brazilian Development Bank, BNDES, based in Rio de Janeiro. On paper at least, Coutinho looks like the dream finance minister for the research community. A former executive secretary of Brazil's science and technology ministry, Coutinho is also a professor at the State University of Campinas in São Paulo and an expert in the economics of innovation. He has already stated that, as finance minister, he would cut Brazil's deficit and thus lower interest rates [WINDOWS-1252?]— a step that might spur investment in corporate research and development in Brazil. Brazil's scientists have lobbied politicians in an unusually assertive and coordinated fashion this year. The Brazilian Academy of Sciences and the Brazilian Society for the Advancement of Science have circulated a letter to all of the presidential candidates, urging them to pay more attention to education in basic science and mathematics.
Furthermore, a committee appointed by Rezende, headed by physicist Luiz Davidovich at the Federal University of Rio de Janeiro, is just finishing a guide for the next administration's science team. It contains recommendations put together by scientists at regional and national science-policy conferences, such as the need for increased emphasis on scientific training to allow Brazil to take advantage of its new-found oil wealth, discovered off the coast of São Paulo and Rio de Janeiro in 2007, while preserving the Amazon. How the country juggles these issues within a coherent climate-change policy are key to Brazil's future. 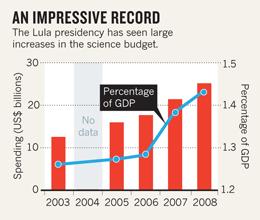